​In a manner of speaking, distillation is nature's way. The weather of the world is created in the tropics, where half the heat reaching the earth falls on land and water masses. Here heat energy is stored within water vapour through the process of evaporation, nature's distillery. When the jet streams return ocean water to inland areas, they do so without sea salts and minerals, all of which have been left behind.
​
Since water is a carrier of minerals and chemicals, let me list some of them A-Z found in our water:

Important Note:
​Our body needs many of the above-mentioned elements, but only in their organic state. They must first pass through the roots of plants before our bodies can assimilate them. Herein lies the big error.

​Nature has a tremendous distilling plants. As the vapours rise, all  impurities are left behind. Only the clouds recondense the water does it again pick up the elements left behind. Now it becomes harmful to us but beneficial to plants. There is a big difference between powdered iron filings and the iron found in plants. It takes no chemist to tell the difference.

The Choice is Clear

All of us use it everyday - from the baby's first cry to the old man's last breath. Water! The one element you need the most and suspect the least. If this shocks you, do not be surprised, as millions of people are still unaware of this "aging process" and indulge in it freely.

There are at least ten different kinds of water. Some kinds can harden your arteries, form gall stones and kidney stones, bring early senility and all kinds of diseases. ​

The Miracle of All Water - Distilled Water
Distilled water is water which has been turned into water vapour, so that virtually all its impurities are left behind. Then, by condensation, it is turned back to "pure" water. Distillation is the single most effective method of water purification.

​Since water is a carrier of inorganic minerals, harmful to the body functions, we now wisely remove virtually all trace minerals, chemicals and foreign particles through the process of distillation. Then, and only then, is water odourless, colourless and tasteless and fit for consumption.

Pure Water Is Your Lifeline
Water is a carrier of inorganic minerals and toxic chemicals of organic synthesis. But through the process of distilling, the water is separated from virtually everything it carries, and is now pure water. As it enters the body, it again picks up mineral deposits accumulated in the joints, artery walls, or wherever such deposits occur, and begins to carry them out . Gall stones and kidney stones get smaller and smaller until they can safely pass through their ducts. Little by little arthritic pains become less as joints become more supple and movable. Arteries gradually become more elastic as blood pressures tend to become more normal. Gradually the outlook on life becomes a little more youthful - ambitions begin to return.

There is then only one way to purify your body and help to eliminate your chronic aging diseases and that is through the miracle of distilled water. A sludge-filled motor cannot operate smoothly unless the sludge is removed. Neither can a body be supple and ageless unless the joints, arteries, cells and nerve tracts are free of mineral deposits.

The Appalling truth
The average person drinks about a gallon of water per day. Adding up the cups of coffee, tea, soft drinks, food and water, this gallon isn't too much. Many men drink much more. At a gallon a day, the average person drinks up to 450 glasses of solids during a life span. These same solids are found in your humidifier and in grandmother's teakettle. Think of it - 450 glasses of mineral solids in your system during a lifetime.

​Natures's Natural Distilling Plant
Distilling water turns it into vapour, and then through condensation, back again into pure water. Rising vapour cannot carry minerals and other dissolved solids - it will not carry disease germs, dead or alive. The secret is that the vapour rises between all the suspended particles and chemicals in the air. When this condensation occurs as falling rain, it picks up airborne pollutants. Not so in a vented distiller where most of them are eliminated. If pure distilled water is boiled in a  tea kettle, no calcium or minerals of any kind will collect to coat the inside of the kettle, even though you used the same kettle for ten years.

The World's Greatest Secret
Distilled water then is water of the purest kind. It is odourless, colourless and tasteless. The purpose of water is to regulate temperature and to act as a solvent. In nature, water in evaporation is so fine that your eye cannot perceive it as it is drawn up into the clouds. Then it falls as rain, keeping the earth from being parched and burned.

As a solvent, it dissolves rocks and soil. It figures in the transport of nutrients into plant life.

In the human body, water fulfils similar functions. It regulates the temperature of the body by helping to take off the extra heat resulting from an intake of some 3000 calories of food each day. Water keeps the body from burning up. It carries waste products from the body.

The Greatest Function of Distilled Water
Distilled water acts as a solvent in the body. It dissolves food substances so they can be assimilated and taken into every cell. It dissolves inorganic mineral substances lodged in tissues of the body so that such substances can be eliminated in the process of purifying the body.

Distilled water is the greatest solvent on earth - the only one that can be taken into the body without damage to the tissues. By its continued use, it is possible to dissolve in inorganic minerals, acid crystals and all the other waste products of teh body without injuring tissues.

For purification, distilled water is the solvent of choice. After mineral deposits are dissolved, gentle muscular exercise can force the dissolved poisons and wastes from the tissues into the blood so that blood can carry wastes to the excretory organs. Then, these organs can squeeze and pour the wastes out of the body.

1) Do we need the inorganic minerals found in our water?
A: Absolutely not! We get our organic minerals from teh food we eat. Fruits, grains, nuts, vegetables and meat supply all the minerals we need. The longest-living peoples such as the Hunzakuts in the Himalayas, the Vilcabamba in Ecuador and the Abkhazia in Georgia (South Russia), live to fantastic age. They drink glacier water, which checks out as single distilled water.

If you would like a clearer understanding, let me put everything in a single paragraph.
Pour a cup of tap water into a pan and boil it. The vapours that rise and then condenses are pure distilled water. It is fit to be consumed. The spots that remain are inorganic minerals and chemicals  - unfit to be consumed.

2) What does the body do with these foreign materials found in water?
​Nature does the very same thing you are now thinking. It tries to eliminate them. Do you recall the water spots on your windows from the water sprinkler? Ever try to remove them? It takes lots of vinegar and lots of rubbing to dissolve the deposits.

This same reaction takes place in our bodies. It begins by putting a thin film along our intestinal walls. As soon as one film is laid, it attracts another film much easier, until it begins to build up and one of the first results is constipation, a plague to millions of people. Other deposits occur where blood flows the slowest, such as in the joints as arthritis and gout, along the arteries as hardening, in the veins as varicose, in the lungs as emphysema. It often coats the crystalline lens of the eyes with a fine film possibly resulting in cataracts. Glaucoma, the dreaded eye disease, can be another result of hard water. The tiny vessels film up in the eye. There has never been a known cause for glaucoma. It might be the mineral deposits.

3) Does distilled water leach organic minerals out of our system?
A: Of course not! "It is only inorganic minerals rejected by the cells and tissues of the body which, if not evacuated, can cause arterial obstructions and even more damage. These are minerals which must be removed and which distilled water is able to collect." so said Dr. N.W.Walker, age 100.

4) Will distilled water help with arthritis?
According to medical science, there is no cure for arithritis. Arithritis is partially caused by mineral deposits in the joints. X-rays will show the mineral deposits very clearly. These deposits crystallise to irritate the joints as they move, causing severe pain and swelling. Since the average person drinks up to 450 glasses of mineral solids found in hard water during a life span, it is logical to assume that these inorganic minerals were slowly deposited in the joints through the years, causing arthritis. Distilled water, in turn, dissolves these mineral deposits. The principal point to remember is that hard water carries inorganic minerals into our bodies, whereas distilled water carries them out. You must reverse this process. It is that simple. 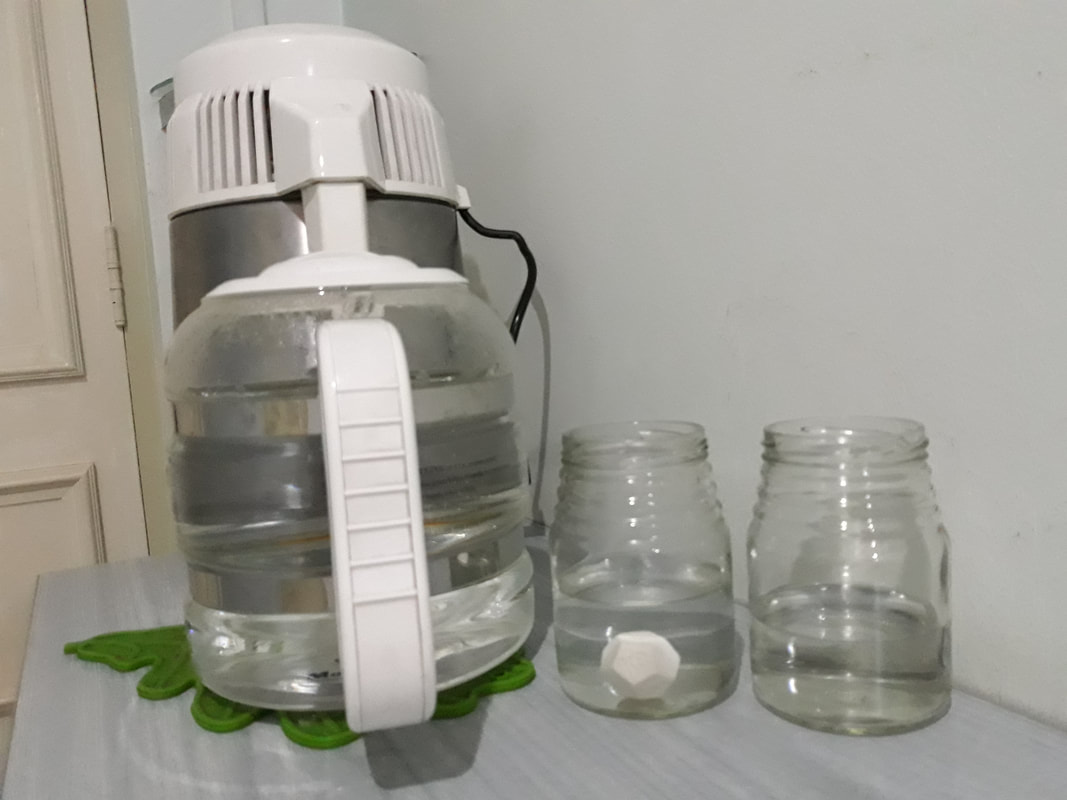 Click here to read about The Other 9 Kinds of Water

It is wise to read about all nine types of water, but there is only one water you must always remember - distilled water!

​Dr Paul Bragg, a life-time advocate of distilled water, lived to age 94, the span of life others only lecture about. He and others with track records say this is your lifeline to a long, happy, carefree span of life.

​You can further enhance the quality of the Distilled Water by adding the koo energy Ball to declutter the cluster of water molecules thus making koo energy water that can dehydrate your body effectively.

Click see the difference in energy here:
bottled distilled water after koo energy ball +108
see demo of Energy of Distilled Water +53 plus koo energy Ball +93 +205
bottled distilled water before koo energy ball +35
Even if you are not using Distilled Water to begin with, koo energy Ball can still enhance your water by declustering the big cluster of water molecules, while releasing the encapsulated toxins, thus improving the quality of the water.