​Stage One
If you catch EBV, it goes through an initial dormant period of floating around in your bloodstream doing little more than slowly replicating itself to build its numbers - and waiting for an opportunity to launch a more direct infection.
​
EBV will also often act when you're undergoing a major hormonal change - for example during puberty, pregnancy, or menopause. A common scenario is when a woman goes through childbirth. Afterward, she may feel various symptoms, including fatigue, aches and pain, and depression.... The virus is especially vulnerable during Stage One. However, it's also undetectable through tests and causes no symptoms, so you normally wouldn't know to fight it, because you wouldn't be aware it was there.
Stage Two
At the end of Stage One, the Epstein-Barr virus is ready to do battle with your body. That's when EBV first makes its presence know by turning into mononucleosis This is the infamous mono that we all grow up hearing about as the "kissing disease". It's what thousands of college students contract every year when they run themselves down with all-night partying and studying.

This is the period when the virus is most contagious. It's therefore advisable to avoid getting exposed to blood, saliva, or other bodily fluids from someone who has mono... or to avoid exposing anyone to your fluids if you have mono.
You can have mono for just a week or two with a mild scratchy throat and tiredness, in which case you aren't likely to realise what's really happening, so you most likely won't visit a doctor for a blood test. ​Then again, you can get hit hard with fatigue, sore throat, fever, headaches, rashes and more that hang on for several months.

EBV has a best friend, a bacterium called Streptococcus which can travel up to create strep throat and/or infest the sinuses, nose or mouth... or travel  down to create infections in the urinary tract, vagina, kidneys or bladder... eventually causing cystitis.
Stage Three
Once the virus settles into your liver, spleen and/or organs, it nests there... the virus may burrow deep into your liver and spleen, causing those organs to become inflamed and enlarged.

The virus creates three types of poison:
​
Viral byproduct - EBV excretes toxic waste product
Corpse - when a cell of the virus dies, which happens often, as the cells have a six-week life cycle
Neurotoxin - a poison that disrupts nerve function and confuses your immune system.

Issues that may result from an aggressive variety of EBV nesting in your organs include:
•    your liver performing so sluggishly that it does a poor job of flushing toxins.
•    Hepatitis C
•    Your liver's sluggish performance leading to the lowering of your stomach's hydrochloric acid and your intestinal tract starting to become toxic. This in turn can result in some food not being fully digesed and instead putrefying in your intestinal tract, resulting in bloating and/or constipation.
•    Your developing sensitivities to foods that never caused you problems before. This happens when the virus consumes a food it likes, such as cheese, and transforms iti into something your body doesn't recognise.

Hypothyroidism and Other Thyroid Disorders
While your immune system is in disarray, EBV takes advantage of the chaos by leaving the organs its been nesting in and making a run of a different major organ or gland - which this time is your thyroid.

Nodules
As a fallback option, your immune system tries to wall off the virus with calcium, creating nodules in your thyroid.

Osteoporosis
That's because your immune system can't get the calcium to wall off the virus from your blood stream, it'll extract what it needs from your bones... which can lead to osteoporosis. This lack of adequate thyroid hormones, coupled with EBV's toxins, can in turn lead to weight gain, fatigue, mental fogginess, impaired memory, depression, hair loss, insomnia, brittle nails, muscle weakness, and/or dozens of other symptoms.

Stage Four
The ultimate goal of the Epstein-Barr virus is to leave your thyroid and inflame your central nervous system.... if on top of that you abruptly get clobbered with some physical or severe emotional injury, the virus will take advantage of your vulnerability ad start to cause a multitude of strange symptoms that strange symptoms that range from heart palpitations to generalised aches and pains to nerve pain.
What's actually happening is that your injured nerves trigger an "alarm" hormone to notify your body that the nerves are exposed and need repair. In Stage Four, EBV detects that hormone and rushes over to latch onto those damaged nerves... EBV looks for those openings (root hairs pop off the sides of the nerve sheath) and grabs onto them. If it succeeds, it can keep the area inflamed for years. As a result, you can have relatively small injury that remains flared up causes you continual pain.

The issues that result from this viral inflammation can include muscle pain, joint pain, painful tender joints, back pain, tingling and/or numbness in the hands and feet, migraines, ongoing fatigue, dizziness, eye floaters, insomnia, unrestful sleep and night sweats. Patients with these issues are sometimes diagnosed as having fibromyalgia, chronic fatigue syndrome or rheumatoid arthritis...

Chronic Fatigue Syndrome
Chronic Fatigue Syndrome is real. It's the Epstein-Barr virus. As we've seen, those with CFS have an elevated viral load of EBV, which systematically afflicts the body by creating a neurotoxin that inflames the central nervous system. This can eventually weaken the adrenals and digestive system, and create the feeling that you have a low battery.

Fibromyalgia
It's the Epstein-Barr virus that is causing this disorder, inflaming both the central nervous system and nerves throughout the body, which creates ongoing pain, sensitivity to touch, severe fatigue and a host other issues.

Tinnitus
Tinnitus, or ringing in the ear, is usually caused by EBV getting into the inner ear's nerve channel, called labyrinth. The ringing is the result of the virus inflaming and vibrating the labyrinth and the vestibulocochlear nerve.

Other Symptoms
Anxiety, dizziness, chest tightness, chest pain, esophageal spasms and asthma can also be caused by EBV inflamming the vagus nerve.
Insomnia, tingling and numbness in hands and feet, can be caused by phrenic nerves becoming perpetually inflamed by EBV.
Heart palpitations can result from buildup of EBV's poisonous virus corpses and byproduct in the heart's mitral valve.
If you have EBV, or suspect you do, you may find the virus in Stage Four beyond frustrating. Take comfort. If you take the right steps, you can recover, rebuild your immune system, return to a normal state again, and regain control of your life.

Types of Epstein-Barr (p50-51)
There are over 60 varieties of the Epstein-Barr virus.
The strains can be organised into six groups of escalating severity with roughly ten types per group. 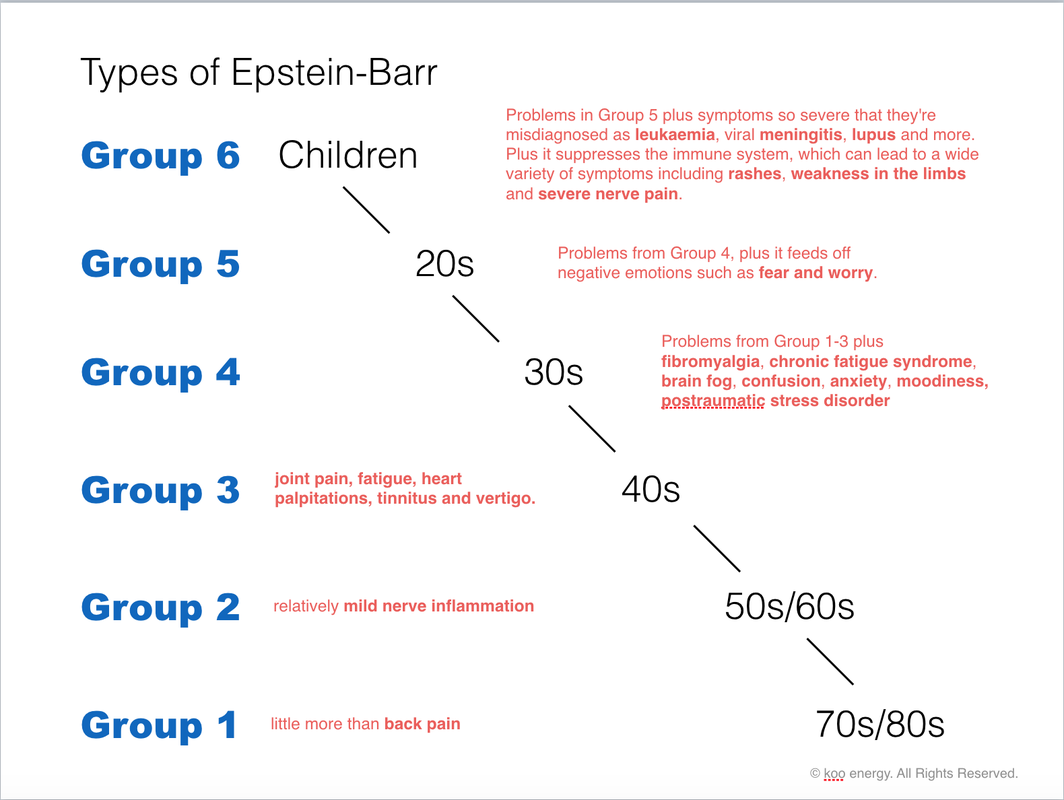 HEALING FROM THE EPSTEIN-BARR VIRUS
Because it's very easy to catch and hard to detect, and can cause a number of mysterious symptoms, you might understandably find the Epstein-Barr virus overwhelming and its effects disheartening.

The good news is that if you carefully and patiently follow the steps detailed in this section (Healing Foods, Healing Herbs and Supplements which includes Spirulina), and in Part IV of the book, you can heal. You can recover your immune system, free yourself of EBV, rejuvenate your body, gain full control over your health, and move on with your life.

How long the process takes varies for each individual and depends on myriad factors.
Some people conquer the virus in as little as three months. However, a more typical period is a full year. And there are some people who need 18 months or more to destroy EBV.

Healing Foods (p52)
Certain fruits and vegetables can help your body rid itself of EBV and heal form its effects. The following are the best ones to incorporate into our diet. Try to eat at least three of these foods per day - the more the better- rotating your consumption so that in a given week or two, you get all of these foods into your system.

Wild blueberries: helps restore the central nervous system and flushes EBV neurotoxins out of the liver.

Celery: strengthens hydrochloric acid in the gut and provides mineral salts to the central nervous system.

Sprouts: high in zinc and selenium to strengthen the immune system against EBV.

Asparagus: cleanses the liver and spleen; strengthens the pancreas.

Spinach: creates an alkaline environment in the body and provides highly absorbable micronutrients to the nervous system.

Cilantro: removes heavy metals such as mercury and lead, which are favored foods of EBV.

Coconut oil: anti-viral and acts as an anti-inflammatory.

Garlic: anti-viral and anti-bacterial that defends against EBV.

Raspberries: rich in antioxidants to remove free radicals from the organs and bloodstream.

Lettuce: stimulates peristaltic action in the intestinal tract and helps cleanse EBV from the liver

Pomegranates: helps detox and cleanses the blood as well as the lymphatic system.

Grapefruit: rich source of bioflavonoids and calcium to support the immune system and flush toxins out of the body.

Kale: high in specific alkaloids that protect against viruses such as EBV.

Sweet Potatoes: helps cleanse and detox the liver from EBV byproducts and toxins.

Cucumbers: strengthens the adrenals and kidneys and flushes neurotoxins out of the bloodstream.

Koo Energy recommends celery, sprouts, cilantro, parsley, lettuce, papaya, sweet potatoes and cucumber since they are easily accessible in the local market. Organic supplies from the supermarket are strongly recommended.

Extracted from the book 'Medical Medium' by Anthony Williams