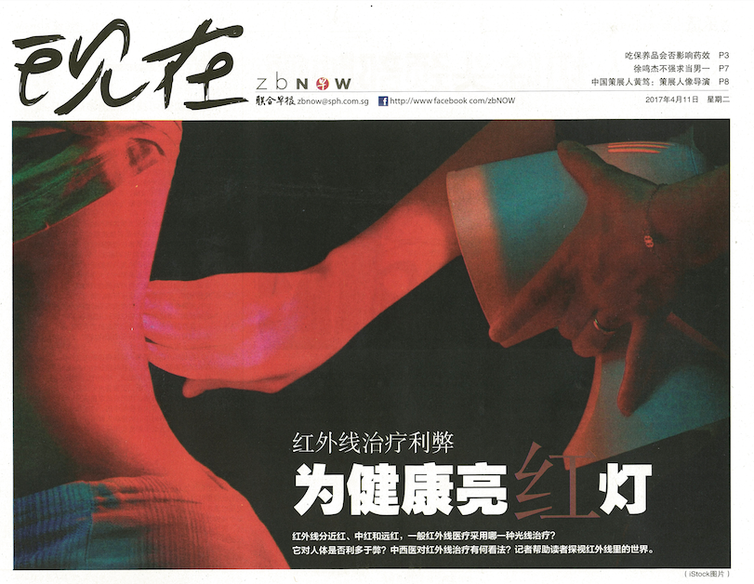 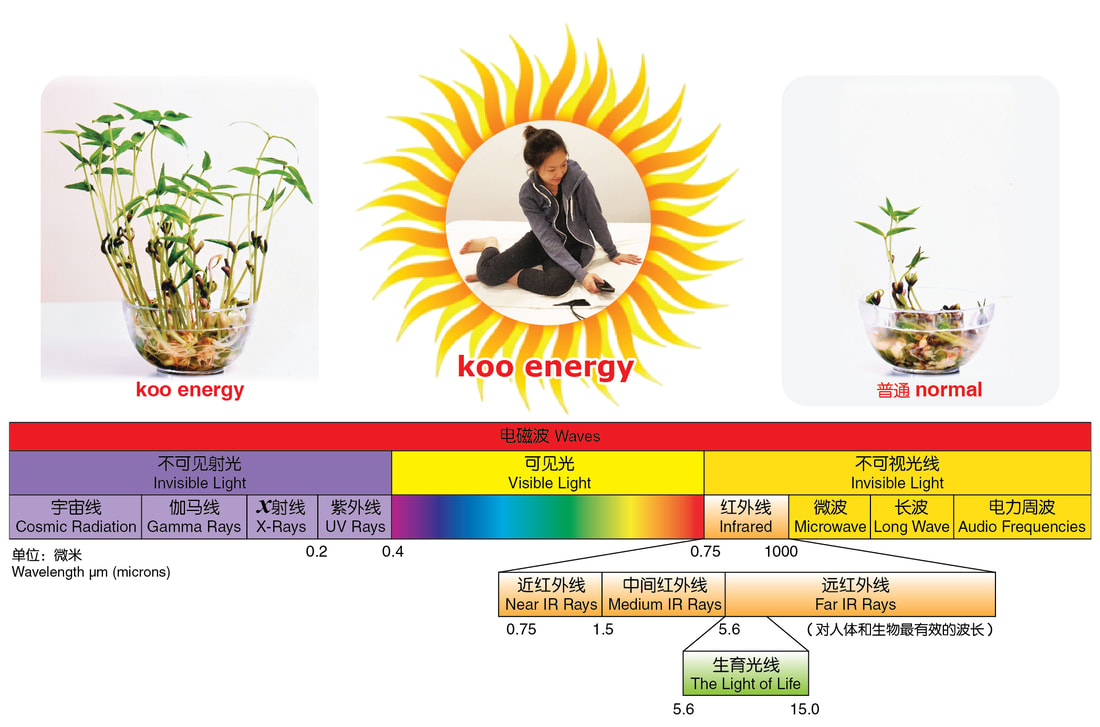 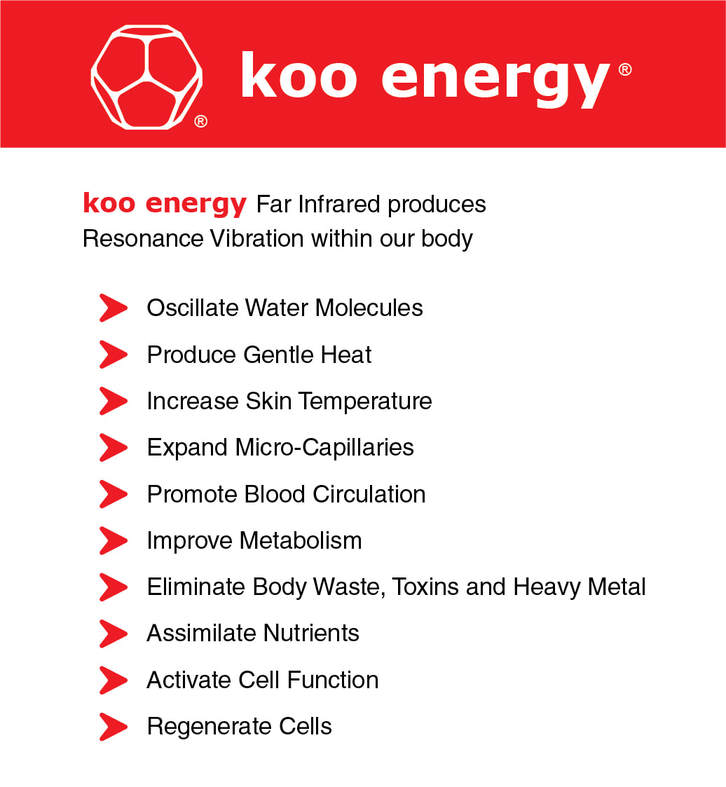 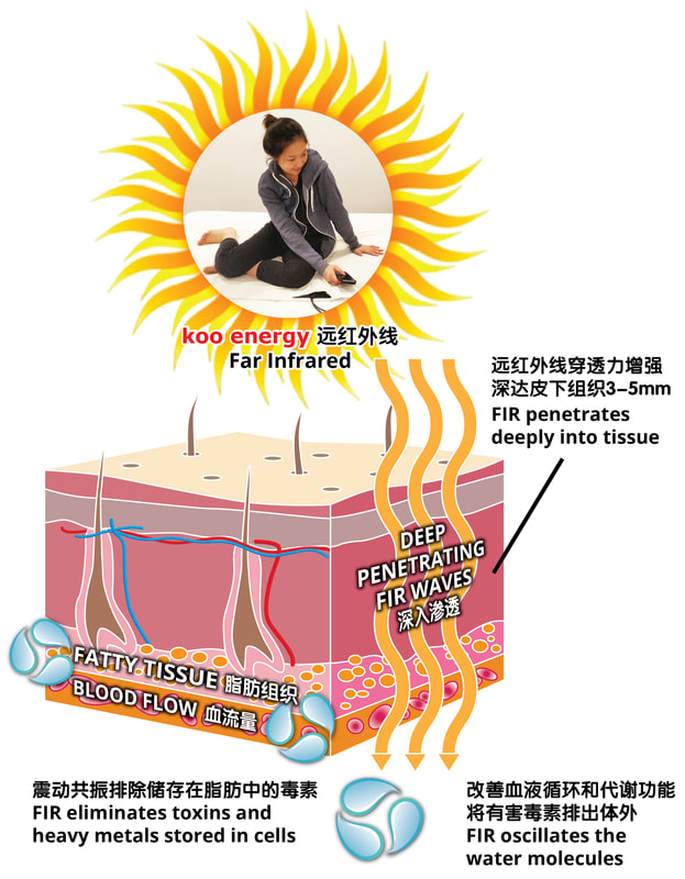 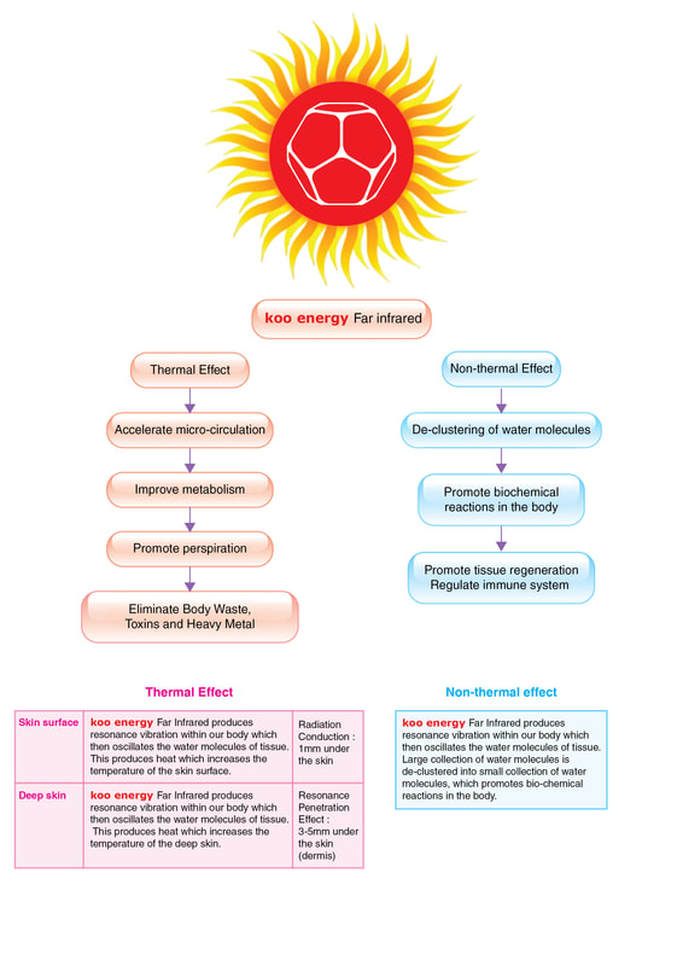 3. Infrared is a ray that transmits heat

4. Our human body also produces Infrared rays
​Not only does the sun emit Infrared. Any object that is hot will emit Infrared Rays, including our human body. That is why in infrared photography, we can still capture a photograph even though the setting is totally dark. This is because our body is a also a natural source of heat. As for the infrared rays emitted by our human body, half of them are Far Infrared Rays with a wavelength of 8 to 14 micrometre.
When the body receives Far Infrared Rays from an external source, the infrared rays emitted by the body will match the same wavelength. This causes resonance vibration which will activate the cells.

5. FIR has the same wavelength as our body cells, thus producing resonance vibration
When you throw a pebble into still water, there will be a ripple effect. Although light and radio waves cannot be seen, it will also have similar ripple effect. When one source of wave is in contact with another wave of a different wavelength, one will offset the other and hence diminish gradually. On the other hand, if waves with the same wavelength meet, a greater wave will result. This is called the resonance effect.
Our human body is made of cells. These cells constitute smaller molecules which in turn are made up of atoms. These atoms have a specific wavelength. When these atoms meet energy with the same wavelength, such as Far Infrared Rays, resonance effect will result. Resonance effect will activate the atoms and produce kinetic energy. This will result in heat being produced which will activate the cells, thus enhancing metabolism and promoting blood circulation. Good health is the result.

7. Far Infrared Rays are widely used in daily life since ancient times
Since ancient times, our ancestors have already possessed the wisdom to reap the benefits of Far Infrared Rays. Roasted sweet potatoes and chestnuts taste a lot sweeter and more delicious than those that have been boiled or steamed. Heating sweet potatoes or chestnuts on hot stones enhances the taste and sweetness. This is due to the Far Infrared Rays generated. ​Substances such as ceramic, soil, glass, sand, stone, bone have the ability to produce Far Infrared Rays when heated up. Heat from FIR will penetrate the food inwards into the core. This will cook the food internally as well as externally, thus making the food more delicious. There are many more ways of using FIR in food preparation. For example, food stewed using claypots are not only delicious but also fully cooked. Wine warmed by ceramic jugs taste sweet and delicious because of the balance in the heat transmission into the core.

8. Far Infrared Rays in Stove, Heater, Sand and Rock Bath
Stove and heater are winter essentials that make use of charcoal to get heated up. Charcoal are made from burning wood at high temperature. Like ceramic, charcoal burning in the stove will also produce Far Infrared Rays. That is why even a small stove can make one feel so warm and comfortable. Because of its strong penetration ability, FIR can transmit the heat into the innermost part of the body, thus making the body feel warm from within the core.The same is true of heaters that are built with bricks or stones in the buildings of Europe and America. These will generate Far Infrared Rays that will make the users feel very warm and comfortable during winter. Sand and Rock Bath also produces Far Infrared Rays.

​1. FIR improves Qi stagnation （寒气）
In Western and Ayurvedic herbal medicine, pathogenic heat is considered a form of toxicity. In Chinese medical theory, this is caused by Qi stagnation. FIR enables the micro-capillaries to expand, enhancing the blood circulation, activating the cell, providing nutrients and speeding up the metabolic rate.

2. FIR improves stress syndrome
Autonomic Nervous System is a control system that acts largely unconsciously and regulates bodily functions such as the heart rate, digestion, respiratory rate, pupillary response, urination and sexual arousal. This system is the primary mechanism in control of the fight-or-flight response. By strengthening the Natural Healing ability, the autonomic nervous system resumes its functions, relaxing and relieving stress, thus improving the physical and mental health.

6. FIR improves the state of injury and pain

8. FIR enhances the quality of hair and nails
Through the bones, FIR is amplified many times, thus activating the hair roots and the area around them. This drastically improves balding problems. Not only will the quality of hair improve, nails benefit too. Diseases related to the ear, which is surrounding the skull, can be resolved too.

10. FIR increases the natural healing ability of the body

12. Use of FIR is simple yet effective in weight management