Medical History: Diagnosed with Prostate Cancer in Jun 2016.
​Frequent urination, especially in the night. Woke up 5-6 times each night.

User Feedback by Granddaughter:
"My grandpa has been bringing this Healing Mat (no heat) overseas too. His caregiver reported that he now wakes up less at night. Previously, he would wake up 5-6 times a night. He looked lethargic, always sleeping many hours in the day. Now, he wakes up only 3-4 times a night. Nowadays he seems more energised and walks with more ease too." 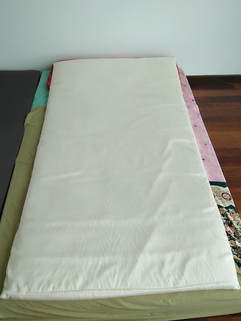 After 4 months
He was introduced to Sleep Therapy using koo energy Healing Mat with heat option.

After 5 days of using koo energy Healing Mat at Level 1, he experienced some reactions which called for close observations at the hospital.

PSA level shot up, followed by a plunge to 14, then 9 and then finally settled at 4. (Information provided by his granddaughter)

Sleep Therapy using koo energy Healing Mat has worked for Mr Goh, because cancer cells could not withstand a temperature of 39.3 degree Celsius and above.

Note: The prostate specific antigen (PSA) is a protein made by the prostate. For decades the PSA test has been used as a marker for the presence of prostate cancer in men. High or rising levels of PSA in blood may indicate the presence of a prostate tumour.

A normal PSA level is considered to be 4.0 nanogram per millilitre (ng/mL) of blood. For men in their 50s or younger, a PSA level should be below 2.5 in most cases. The normal range of PSA levels tends to increase as a man ages, with some minor variation between races. Older men often have slightly higher PSA levels than younger men.

Most doctors considered PSA level of 4.0 ng/mL and lower as normal. Therefore, if a man had a PSA level above 4.0 ng/mL, doctors would often recommend a prostate biopsy to determine whether prostate cancer was present.

Important Note: In the process of using koo energy Sleep Therapy, the self-healing ability of the body is tremendously enhanced. This self-healing ability enables the body to regulate its functions in many aspects. Oxygen supply is increased throughout the day. Hence, elimination of heavy metals and toxins is speeded up. These clearing process will inevitably cause some discomfort known as detoxification reactions, but will subside over time, ranging from a few days to to a few weeks, depending on individuals.
Home | 主页 | Children | Adults | Products | Test Reports | Testimonials | Events | Contact Us | Disclaimer                  © koo energy. All Rights Reserved.