"Things are getting better. He could learn things now.”

5yo Boy H (Switzerland)
​
Medical history: Diagnosed with Autism at 4yo.

Detoxification at a glance 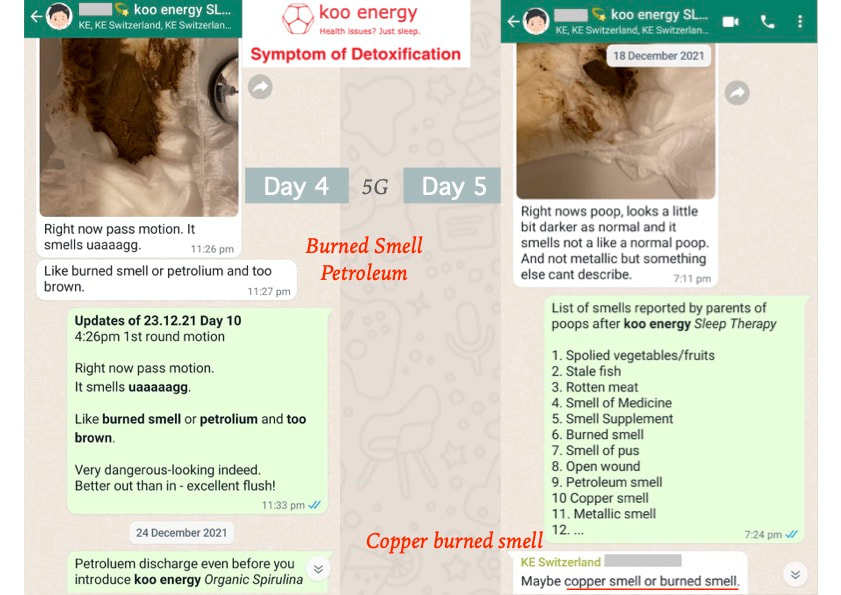 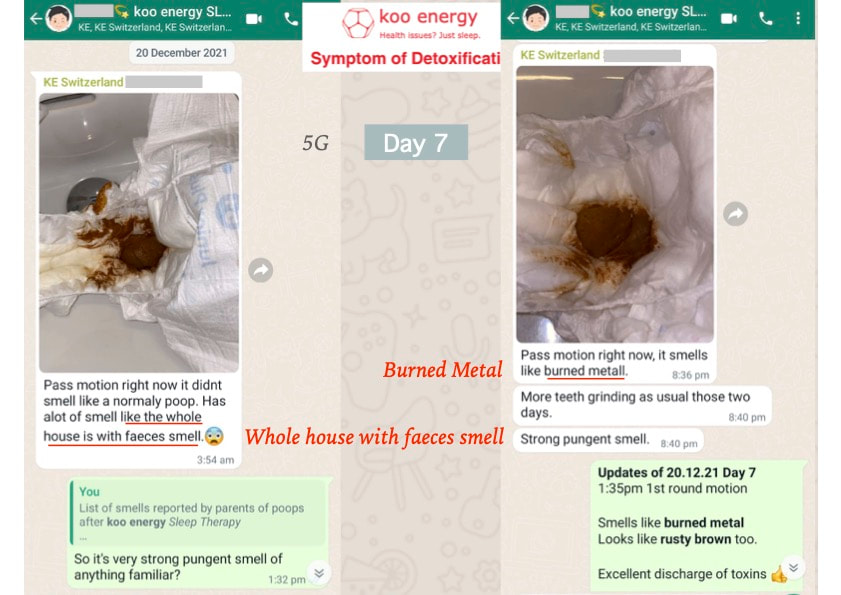 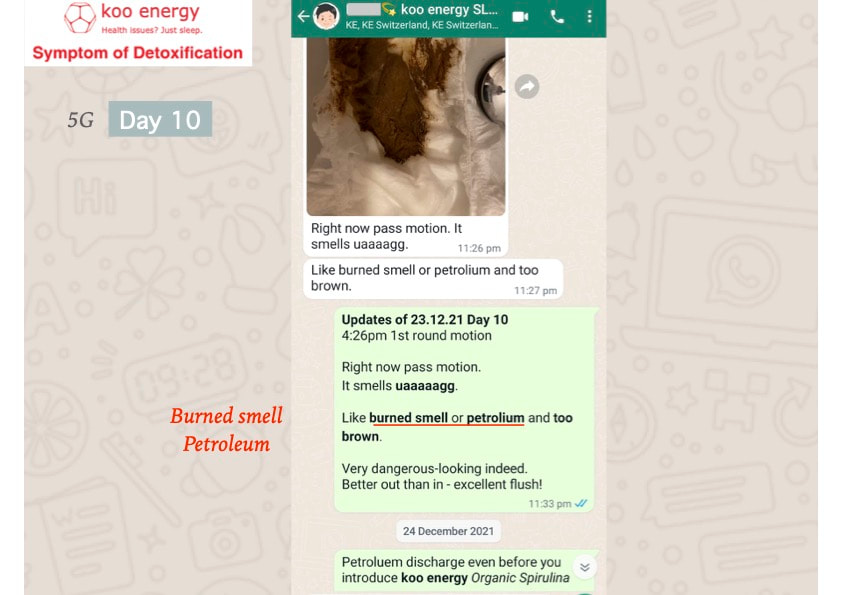 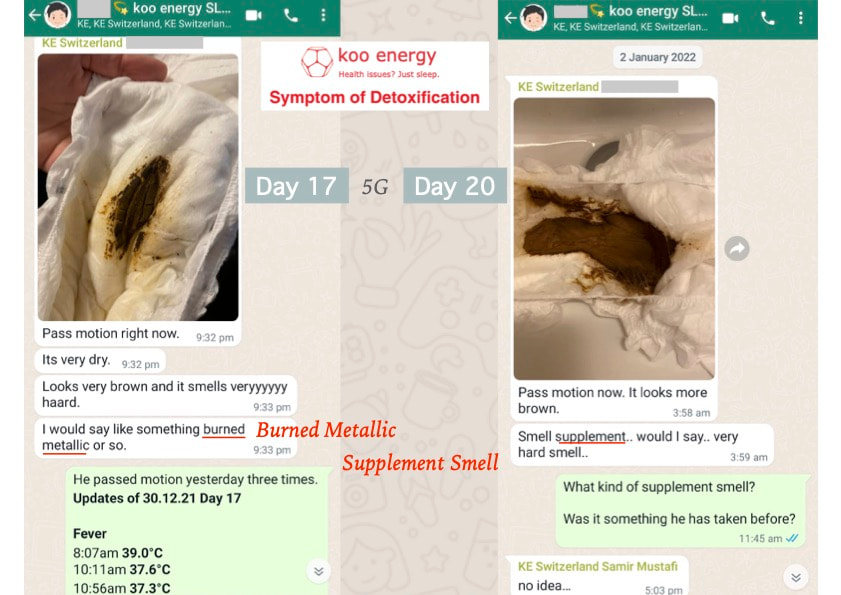 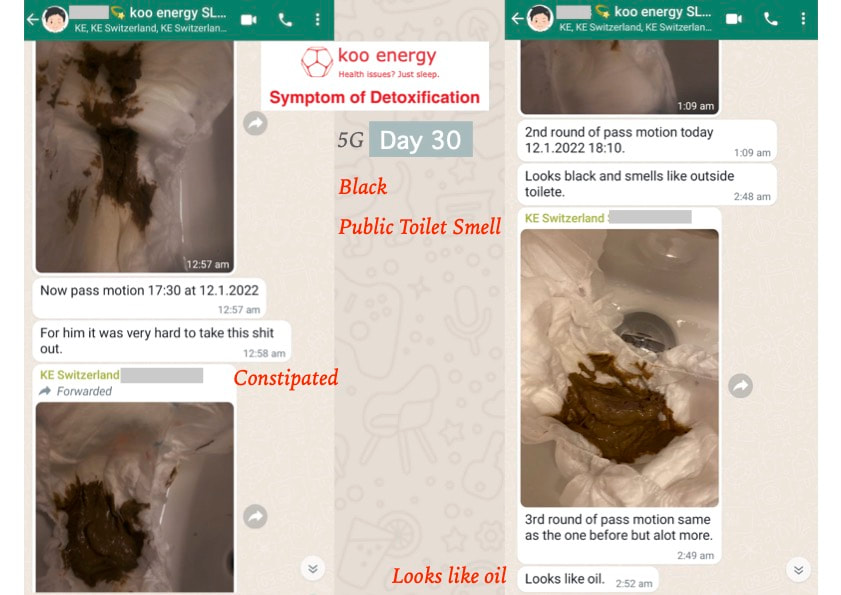 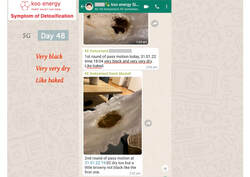 "It was just something metallic. Petroleum I think so."
Father: She said the smell was like nothing before Sleep Therapy.

Consultant: Could she describe?

Father: She could not describe it. It was very hard that she could not breathe in the toilet. When he passed motion, the whole apartment smelt like this.

Was it some specific metal?

Father: I don't think so. It was just something ‘metallic’.

As for the supplement, I do not think it is something we had given him before. We did not give him supplement since he used the Healing Mat.

Father: Petroleum I think so. I smelled it too, sometimes. Like the ones in petrol kiosk.
That happened 2 or 3 times. That was just 1 week. After that, it was the burned feature like before.

Petroleum smell just for 1 week.
After that came the same burned feature like before, like the beginning, but harder.
"Same harsh smell like before - like burned feature mostly."
Father: After taking koo energy Organic Spirulina on Day 62 on 14 Feb, his motion was a little black and darker than before.

Father: Not from the beginning,  but most of the time, he has been having running nose.

Consultant: Was he crying?

Consultant: It's an easy release. Good discharge for ear nose throat faculty. This was good clearance.

Consultant: Was he scratching?

Father: Yes, he was scratching.

Consultant: After discharge, do you see him scratching?

"Those days easier to fall asleep."
Progress of Sleep Quality/Energy Level on Day 30

1b. Yes, he runs more before bedtime.

1d. He is displaying more anxiety when lights go off.

1h. He falls asleep in a minute at parents room.

1i.He is turning around more.

1j. He sweats more at his back.

1m. Eyes not fully shut but not everytime, also sometimes they are fully shut.

1n. His mouth is fully shut.

1o. Sometimes tired in the morning.

1q. More dark eye circles now as before.
​
1r. More teethgrinding by day as before.
"He sleeps throughout the night."
AFTER

Father: For his sleep, sometimes he is sleeping at L4 for 9H.

Now it is better. Not that often as before that he’s coming to parents’ room.

"No more teeth grinding. His eyes are fully shut now."
AFTER

Father: No more teeth grinding.
​
When he first started Sleep Therapy, he was trying to get out of Healing Mat.
Now, he sleeps through the night.

His eyes are fully shut now. Before he opened his eyes a bit.
"No more dark eye circles."
AFTER

Consultant: It was stated he was more tired in Day 30.

Father: Now no more.
"When he goes to sleep, he sleeps in a few minutes."
AFTER

Consultant: He used to run a lot at bedtime.

Father: Not anymore. Now he is taking a shorter time to fall asleep. When he goes to sleep, he sleeps in a few minutes.

Consultant: That's great. That will save mummy a lot of time.

"Better appetite than before."
Progress of Dietary Habits on Day 30

2a. Everyday distilled water just one bottle with lemon until now.

2b. He drinks alot of water.

2c. He eats until he thinks it’s enough and then he runs to play. He eats too little.

2d. Is he more cranky or happier at mealtime? Cranky or happy - thats depends on the meal. When is something he like he came by himself to eat.

2e. Better appetite than before.

2f. Eating More with his hands.

2r. He takes cow milk every night before sleeping.

2s. He ate just two yogurt this week.
​
​2t. Still taking eggs/eggs-included dish once a week
"​Most of the time, he sits at the eating table for a long time, not like before."
AFTER

Father:  Most of the time, he sits at the eating table for a long time, not like before.

Before, he ate and then he ran away to play. He did not stay for a long time, sitting at the eating table.

He eats a lot more than before. Better appetite.
"​Now he eats mostly everything."
AFTER

​Father: Now, he eats mostly everything. He eats faster.
​
Before Sleep Therapy, he was a picky eater.
Now he eats not everything, but mostly the things offered.

He has tried apples. He likes banana, and watermelon juice.
"After Spirulina, he ate an apple for the first time."
AFTER

Father: After (koo energy Organic) Spirulina, he ate an apple for the first time.
Before he never ate an apple before.

Consultant: So there is a change in taste bud?

Father: He ate cakes too now. He is not like before.

Consultant: Besides apples and cakes that are new, what other new food is he taking?

Father: He is not like before now.
Before Sleep Therapy, he was nervous and did not eat. When you gave him something to eat, he would be nervous and reject it.

Now he accepts almost everything.

Father: Yes.
Mother said before he did not eat beef. Yesterday, he just took it without saying anything.
"Not perfect, but he tries to use the spoon."
After
​
Consultant: Is he eating on his own now? More than before Sleep Therapy?

Consultant: With forks and spoon?

Consultant: Is that a change? Compared to before Sleep Therapy?
Previously was he eating with his hands?

Father: With his hands mostly.

Consultant: Now it is with spoon. Excellent, that's social etiquette.

Father: Not perfect but he tries.
"Sometimes, he eats on his own now."
AFTER

Consultant: He used to be fed by parents. So no he's handling on his own.

Father: Sometimes, he eats on his own now. He does not wait for us.

"At toothbrushing, he doesn't cry anymore."

Progress of Toothbrushing on Day 30
​
3n. At toothbrushing, he doesn’t cry anymore.
3o. He doesn’t struggle anymore
3p. He just stays quiet although he still doesn’t like it much.
"My wife just gives him the toothbrush, and he does it alone."
Consultant: Before Sleep Therapy, was he struggling at toothbrushing?

Father: Yes, and he cried. But now not anymore.

Consultant: Great. So now he would just follow instructions or let you brush?

Father: My wife brushes his teeth. She just gives him the toothbrush, and he does it alone.

Progress of Temperament on Day 30

4a. happier or angrier - tt depends on whats about. We think the same.

4d. Yes just for the mobile phone he asks for it the whole time. We took it away.

4e. When stop him from getting/doing something he should not, he is more calmer.

4g.For the trucks not a lot of reactions now. Other sounds react.
​
4h. He doesn’t show anxiety of washing machine at showering.
"Now he can stay 40-50 minutes sitting still."
Day 97
​
Consultant: Any changes in his responsiveness in school? Did you get any feedback from school?

Father: Better.
Before, the teacher said he did not stay sitting. Now he stays.

That was his primary problem that he did not sit with all the kids for a minute.

Before he could not even stay for 5 minutes.

Consultant: That is good changes.

5e. Less staring closely on toy/other things.
​
​5f. Less spacing out or going into his own world Now he plays more puzzle.
"Faster to get his attention. More eye contact than before."
Consultant: What is his attention span?

Father: Faster to get his attention now.
Longer now I would say.

He wants to go watch TV and listen to music.
We say to him to go to play. Then he gets angry for a few minutes. Then he goes to play.

Progress of Behaviour on Day 30

Consultant: No more throwing of things?

Father: Not any more.

Consultant: This is a great improvement which tells you about his sensory issues being resolved considerably. In the past, he would throw every other toy in the video, and he would feel satisfied by smiling

Progress of Responsiveness on Day 30

7a. Slower in his response to mama/papa/brother

7b. Following instructions/commands better than before? Little better.

Better response. When you call his name, he turns around. Not like before, you have to call him for 3 or 4 times.

Understanding instructions, he is better.

8a. He says exactly what he wants.

8c. Less body gestures to express than before Sleep Therapy.

9a. More gestures when he’s discomfort.

9b. Less touching his eyes/ears/nose more or less than before Sleep Therapy. Now he closes his ears.

9c. Pointing his hands/finger to what he wants more than before. When he wants to go somewhere tells with his hands.

10a. More mumbling sound than before Sleep Therapy

10b. More willing to express himself in words

10c. Is he able to copy parent's words more or less than before Sleep Therapy? More , he repeats the same we say.

10d. More or less initiative to say words of his own?  More he says the words he always knows himself, but not clearly.

He was not expressing much in the past.

Consultant: What is your experience with koo energy Sleep Therapy so far?

​Father: I think things are getting better. We will continue. We will have to teach him new things. I think he could do things...