3岁 男生 D （英国伦敦 ，英国）
​​
Medical history: Generally well, except delay in speech and language. He was on waiting list for ASD Diagnosis. School observation report matched that of parents at home, highlighting symptoms of ASD. 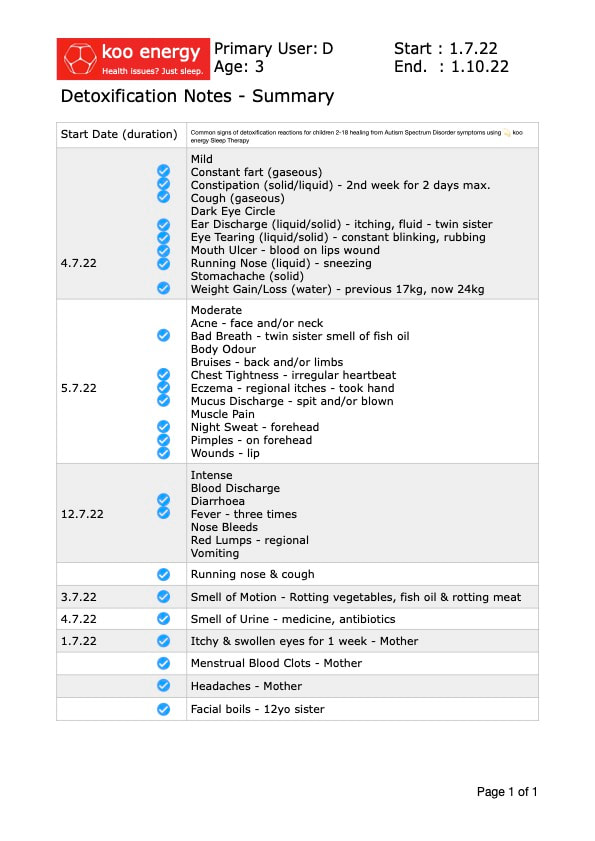 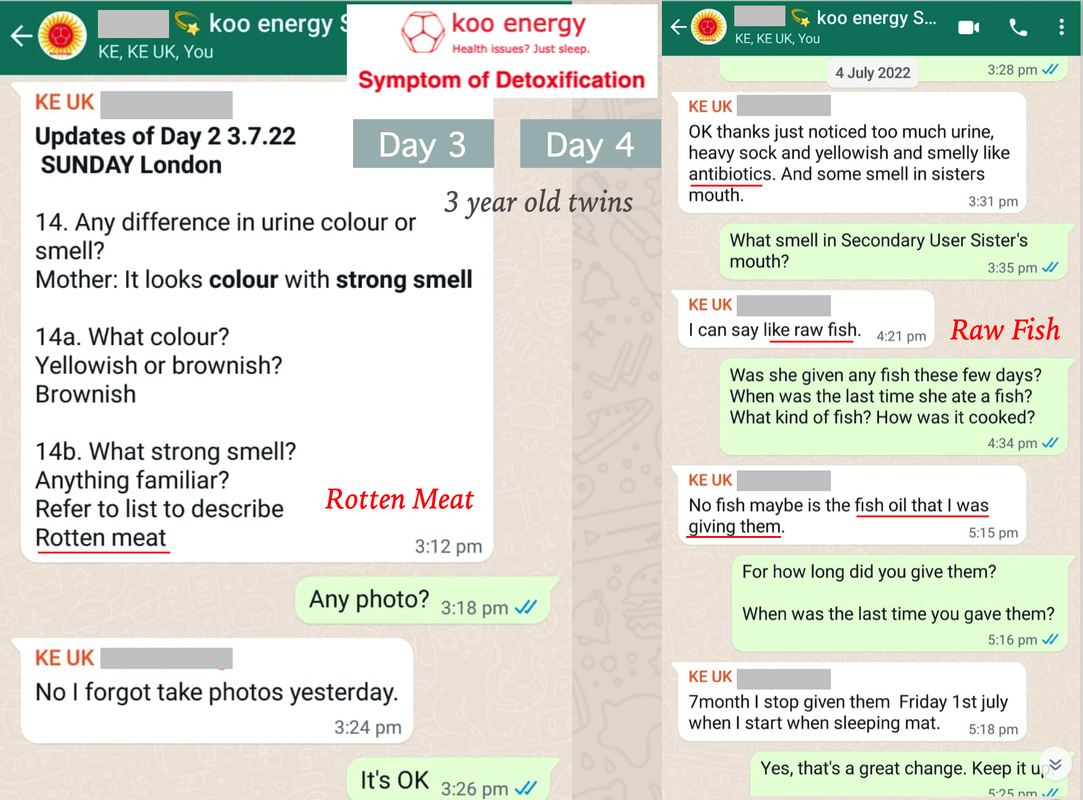 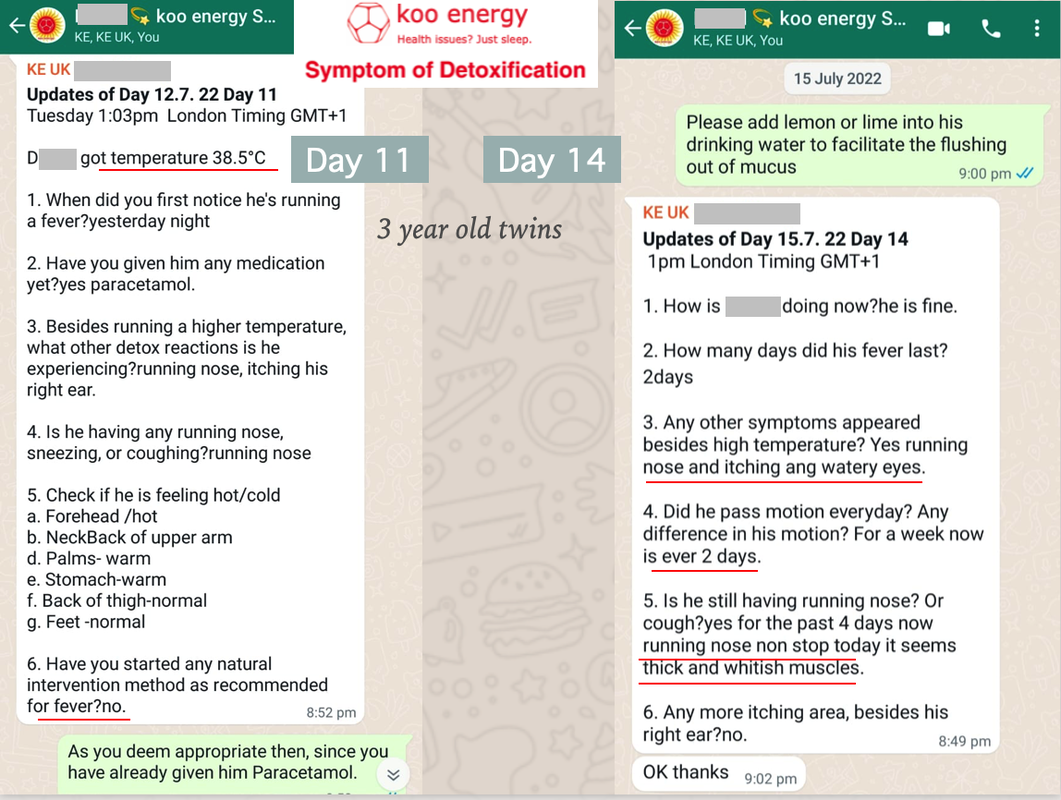 7.10.22
After 3 months, Mother is very happy to share her twins' progress in every aspect.

"I have stopped giving him magnesium pills."
AFTER

Consultant: Did you give your child magnesium pills?

Mother: I was giving him before. Since beginning of Sleep Therapy, I have stopped.
"He settles down really fast."
AFTER

Consultant: What are the changes in his sleep?
Mother: Immediately he goes to bed now. He does not stay long. I can say 20 minutes.
​
Consultant: Compared to last time 1 to 2 hours.
Mother: Yes, he settles down really fast.

Consultant: That is very good neurotransmitters - melatonin and serotonin balance.
Mother: Just switch off all the lights, you just say bedtime. Before you know it, he is already asleep.

Consultant: Excellent. That is a good sign of his ear, nose, throat being resolved.

Mother: No more eye circles.
"When he sleeps, it is very good. When he wakes up, he is very calm."
Consultant: How about his energy level and stamina in the day?

Mother: Yes, it is better. When he sleeps, it is very good. When he wakes up, he is very calm.

Consultant: That will give him a better state of mind to learn, once he’s well rested in the night.
Consultant: How about his energy level in the day? Any difference?

Father: He is energetic. He was energetic before Sleep Therapy. But it just that sensory issues were keeping him from doing the right things.

He is less cranky, unless he wants something and you do not give to him.

"​He is more receptive to food. He is chewing better."
DIETARY HABITS
​
BEFORE
He was a picky eater.
He only ate like grapes, fruits, yogurt, bread and pasta which he did not want to change.

AFTER
Consultant: Now, is he more receptive to food?
Mother: Yes, because now I give him a variety of food. Not just one.

Consultant: That's good. It is also thanks to his sense of smell that has been regulated. He will not find these food disturbing like in the past.

How about his chewing?

Mother: He is chewing better.

​Consultant: This is related to his saliva production. In the past, he might have trouble. That's why he could not chew well. Now with better production, he should have better control and therefore eating with more ease.
"​Eating everything now. Trying new food."
AFTER

Consultant: Once he started Sleep Therapy 3 months ago, you noticed that he’s eating better?
Mother: He eats better. When he sees somebody eating, he will just come. He eats everything now.

Consultant: He’s previously reported to be a picky eater. What food was he trying these 3 months? Any new food?
Mother: He’s trying African food now. Any fruits. He’s taking fruits more - pineapple, apple. He likes grapes - one of his best fruits.

In the past, he had issues eating due to his picky eating and lack of appetite.
"He is able to feed himself now. He can use his spoon."
Consultant: Is he able to feed himself now?
Mother: He does. Although I still assist him because he will not eat well. He can eat by himself.
Consultant: Let him try, even if it can be a mess.
Mother: He can use his spoon.
In the past, he could not. He was so lazy. He did not want to do it.

Consultant: It is not about laziness. It’s because the control was weak.
​Now that he has better control of his motor cortex, which controls his gross and fine motor skills. He is able to cope with it better. That’s why you can see the change.
"​He would be seeing his hands, just like he discovers that: I have hands now!"
​
AFTER

​Mother: I see it now. He would be doing (seeing) his hands, just like he discovers that: I have hands now!

Consultant: Interesting! That’s how he can coordinate his motion better with the toxicity being reduced. The problem they used to have in the past - they could not have the sense of where their hands or legs - they could not even manage their motor coordination because of toxicity in the head. It is a very interesting way to describe it: he suddenly discovers he has hands!
"He put on 7 pounds within 3 months. He is eating well now."
Consultant: You said he's putting on weight?
Mother: Before we he was 17.

Consultant: Are you concerned over his increase in weight.
Mother: For me, I think he’s ok. Because most of his age children weigh more than that.

Consultant: Previously he was not eating well and therefore his weight was under.
Mother: Because he was born big, when he started growing, he started losing his weight.

When he was born, he was chubby and big. When he was not eating well, he started losing weight. So for me, he’s fine now.

​"Now, I do not use diapers in the house except when he goes to bed."

TOILET HABITS
​
​BEFORE
AFTER
Mother: I do not use diapers in the house, except when he goes to bed.

"Now, he brushes his teeth himself."

Consultant: How about his potty training? Did you succeed in helping him?
Mother: Yes, he does now. When he wants to poo, he will just take his potty, sit down there and do his business.

Consultant: That is a big difference. In the past, he was on diapers 24/7.
Mother: Oh my god! In the past, he would not do it.
​But now, he knows. Like this morning when I gave him food, he just went and took his potty and pooed.

Consultant: In the past, did you try to train him?
Mother: I tried a lot of times. I could not succeed, I stopped.

Consultant: Because you couldn’t in the past?
Mother: Yes, it was so difficult. Because in the past, he did not know when the poo was coming. He did not feel it.
But now, he knows when it’s coming, and he takes the potty to sit down to poo.
"Somedays he would let you brush his teeth. (Mother used to brush his teeth by force.)"
AFTER

Consultant: For toothbrushing, any changes over past 3 months?

Mother: Not really much. Some days he would let you brush. Some days, he still does not like.

Consultant: Let him brush his own toothbrushing. Let him try.

"Now he can recognise that people are close to him.
​No longer sitting alone and doing things alone."
Consultant: Can you recall what expectations you listed out three months ago?

Mother: I was saying that I expect him to have more understanding and to interact more with others which I know he is trying. I am seeing more from him, so that at least he can catch up.

Consultant: So you are talking about his communication skills?

Consultant: So you have seen some changes and improvement over the past 3 months?

Mother: Yes, I have seen it. Now he can recognise that people are close to him. Just how now he is not alone is really a BIG something. Now Not like sitting alone and doing things alone in the past.
​"Twin sister has more words than before."
Consultant: Previously your intention was to buy this Healing package for your boy.

Mother: Yes. I can see. Two of them use it. It really helped her as well. Her understanding becomes more. She understands more in her language. Even her words. She has more words than before.
"I am definitely happy to see his progress."
Consultant: I would like to check if your 12yo girl experienced any discomfort or healing?

Mother: Yes, I can say so. She was not sleeping in the same room. I did not notice anything much from her.

The only thing I noticed also from her is that she is really calm now as well.

From the beginning, the school said she was not doing well. But now she's really quiet and she does very well now. Most of the time, she comes with achievement in her class, like rewards from school.

Yes, acne - she came out with a lot of pimples on her face - very big like boils. Now it is getting clearer.