"He has more emotions now. Whatever he's saying, it always makes sense.
I am definitely happy to see his progress. Definitely there are progress.”
​
​~ Mdm Roshan

3yo Boy T (Kuala Lumpur, Malaysia)
​
Medical history: No assessment or diagnostic done so far. It is based on his milestones achieved and behaviour at home and school. Started school at SEN centre everyday. Intervention with Speech Therapy twice a week, and OT twice a month. 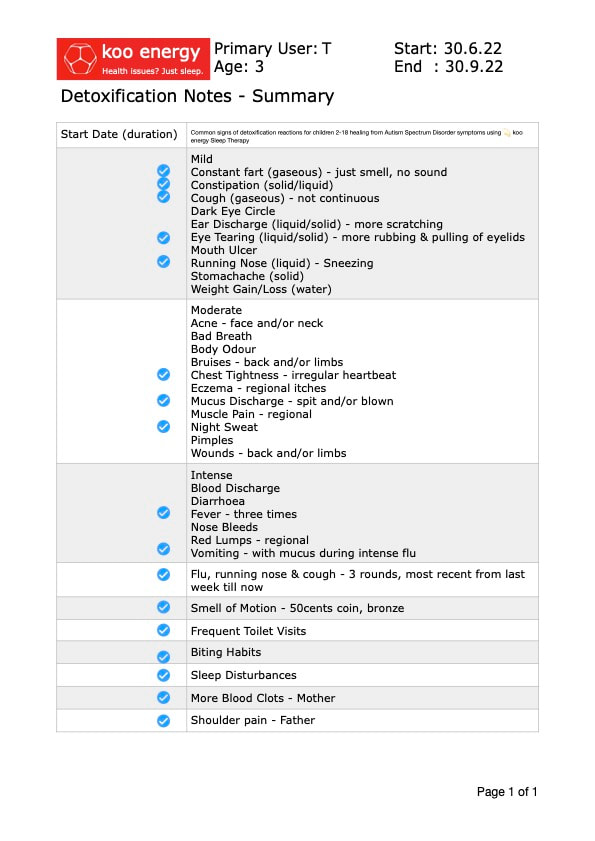 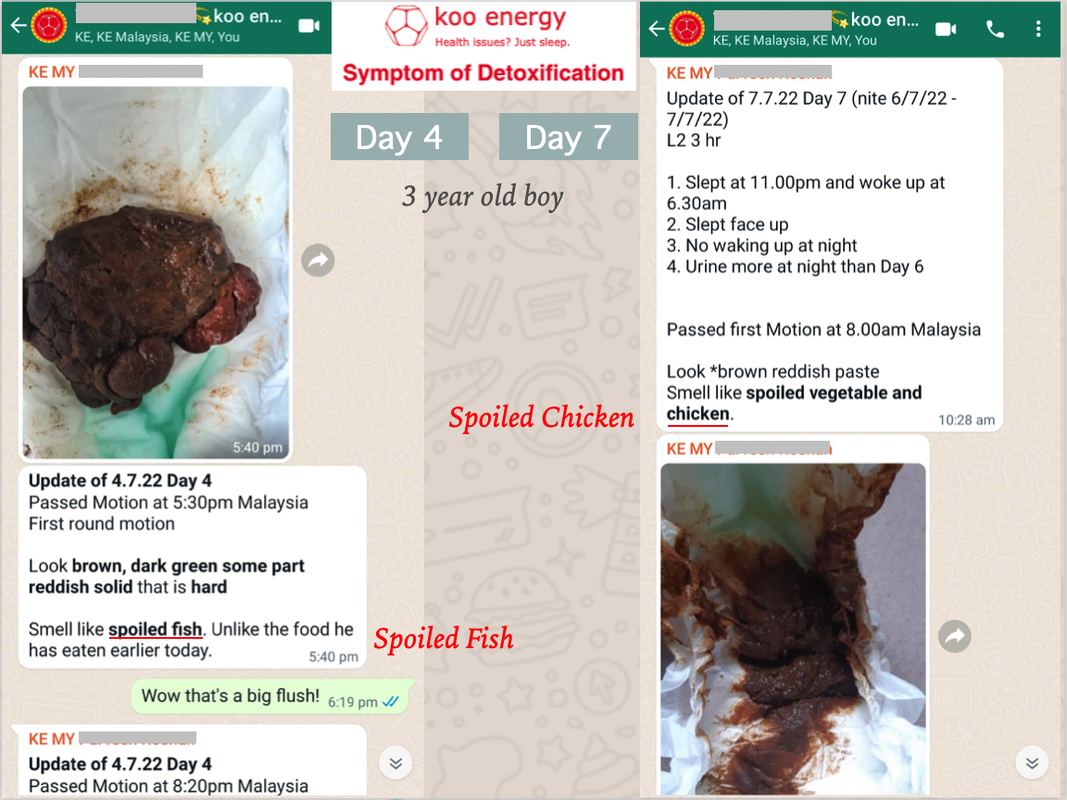 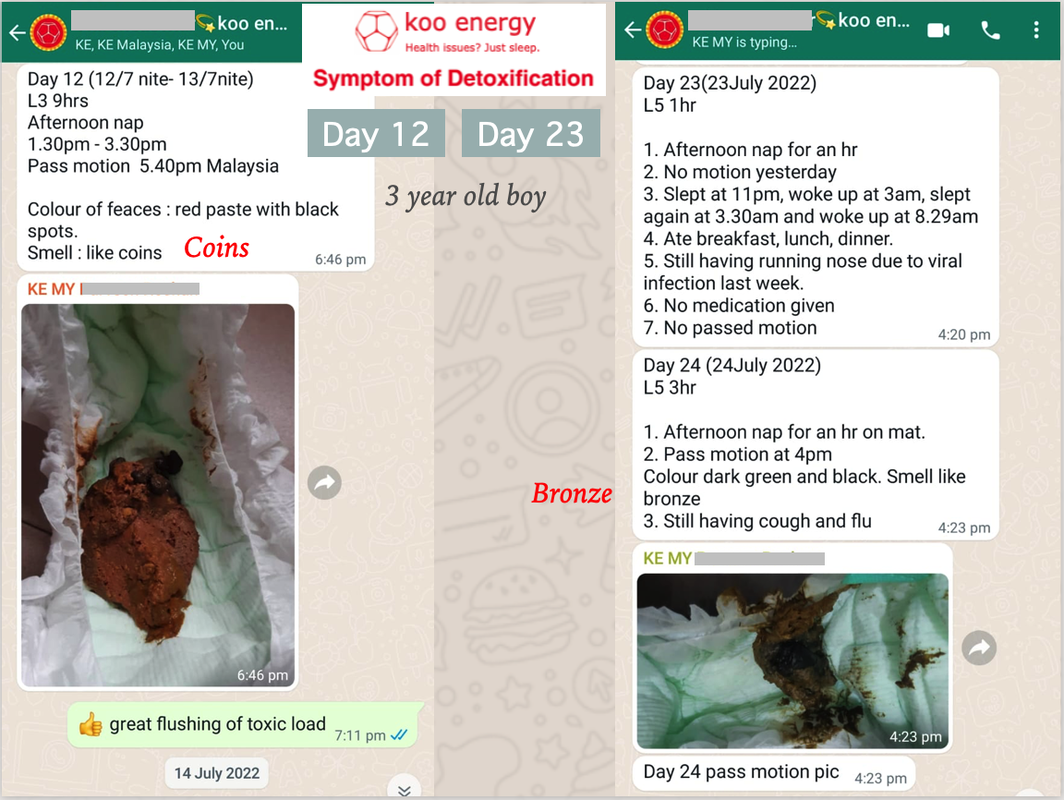 6.10.22
After 3 months, Mother is very happy to share her son's progress, in every aspect.

"Sleep was better for first month. Next 2 months were not good. He developed running nose & cough"
SLEEP QUALITY/ENERGY LEVEL
​
Consultant: What are the changes you have seen for his sleep?

Consultant: Hopefully after his running nose and cough round of detox are over, he will be able to sleep better.
"It takes him a few minutes to fall asleep."
Consultant: How about his teeth grinding? Any teeth grinding heard?
Mother: Yes, I have heard, but not as frequent as last time. But he is still grinding his teeth. And also biting his t-shirt - that’s something he developed and biting stuff.

Consultant: This is the ENT we hope will clear up too.

Consultant: Is his mouth open in his sleep?
Mother: When I said open, it is just slightly ajar.

Consultant: Is he snoring?
Mother: Yes, it is because he’s having running nose.

Consultant: Hopefully, that will go away soon.
"Naptime is now 1 and a half hour - good duration."
AFTER

​ Consultant: That’s good duration and a sign of good sleep - quality sleep.
"I have stopped bring him for a car ride. (in order to make him fall asleep)"
AFTER

Consultant: Is it easier for him to fall asleep now?

Mother: I have stopped bringing him for a car ride. I bring him straight to the room. I just talk to him - I love you, good night, . Within 5 or 10 minutes, he’s already sleeping.

Consultant: I cannot imagine after so many years you have to still go for car rides.
Mother: That is something I never realised I could stop. Let’s see what he does without car rides. I noticed that even when I bring him to car rides, he would be observing.

Consultant: These are changes if you know he is ready. Try to do it the more normal way.
"I realised I do not have to do so much (at bedtime)."
AFTER

Mother: I realised I do not have to do so much. When I tell him ‘let’s go to the room and let’s go and sleep’, he holds my hands and we just walk upstairs and sleep. Those days I noticed when he was not sleepy, he used to jump around, move around. These days, he’s not jumping or moving around in the bed. Even if he wakes up in between, he will just squeak or he’ll just say something, but he will just remain in bed - looking at me. He’s not hyper - he does not get up.

Consultant: This is the regulation of serotonin and melatonin level - now it is more regulated - you do not get a superman in the middle of the night.
"He does not cry at night anymore."
AFTER

Mother: The crying has reduced. Not reduced. I would say there is no crying. He does not cry at night.

In the past, he used to cry. We had to carry him and then we had to push him in the stroller.

These days, we are not doing any such. If he stays awake until 5, let it be and I will be just next to him. There is no phone time. I leave at 6.30 and I told my husband if he gets up early, don’t you play the phone.

DIETARY HABITS
​
BEFORE
​
AFTER
​
​Consultant: What are the changes so far?
Father: The changes is that he eats more now. He has got a better appetite than he had before.

He eats more. Of course the fruits and vegetables are always there. The Ethiopian food is always there too.

He tries new food.
Of course, meat. He has never tried meat. But now he takes meat.

Chic peas paste - Ethiopian food which he picks up now. In the past, he never ate that.
"​I have inroduced more food and a lot of fruit juice for him."
AFTER

Consultant: He did not eat fruits nor vegetables like it is. He ate only when mashed or blended fruit juices. Any changes to his eating habits?

Mother: I have introduced more food. I reduced cow’s milk and eventually, when we give him milk, he did not want. We tried to give him substitutes - tempeh soy-based stuff.

Mother: We introduced a lot of fruit juice for him - watermelon, papaya, lemon, dragon fruit, blueberries, strawberries. Carrots. My helper blends some fruits, no milk in the morning.
"​Yes, he can eat on his own now."
AFTER

Consultant: Can he feed himself better now?
Mother: Yes, he can eat on his own.
​In the past, he’s always being fed. We never really tried. Sometimes he refused food.

Mother: Nowadays, he’s more open to food. If he sees a cup filled with water, he just drinks the water. Sometimes, he wants to put his hand inside.
Sometimes, he looks at my tea and wants to try.

Mother: He goes to the table and looks through the Tupperwares and sees what’s in - he wants to eat. He goes to the food cupboard - he opens and checks. Then he takes his own food and asks us to open
Consultant: Was he like that before?
Mother: He is very open to trying different kinds of food right now.
In the past, he refused to try many food.

These days, we fry broccoli in flour and gave it to him - he eats that. He tries mushroom, tempeh, lady’s finger.

"Whe his pampers is too heavy, he will come to me - he wants me to feel it."
TOILET HABITS
​
​BEFORE

Consultant: Not upset if poo poo or urinate in pampers. Never indicated to change pampers.

Mother: When he poo poo, he does not tell still. But when I say let’s go to the washroom, he will quietly follow me to be washed. Sometimes, he goes washroom straight away. That is an indication that he has already pooped.

When his pampers is too heavy, he will come to me - he wants me to feel it.

Consultant: How is this different from the past?
Mother: In the past, he did not really feel whether he peed or pooed. Those days when I said, he would not want to come.

These days, he follows me to the washroom and quietly stands to be washed.
​
Consultant: Sense of smell is sensation. Likely, the sense to pee or poo is another sensation controlled by motor cortex. You still need to hold it up with sensory cortex. It is interrelated. Once toxicity has been cleared, it will benefit his sensation, and his awareness of pee or poo is coming on. You are already seeing it that now at least, he agrees to go to the washroom if he has to pee or poo.

"He's ok with it - brushing his teeth with her finger. He opens his mouth."

Consultant: Any difference in his toothbrushing?

My helper used her finger to brush his teeth. He’s ok with it. He opens his mouth.
"He can wear his own T-shirt now."
AFTER

Mother: On another note, he can wear his own t-shirt.

In the past, he did not wear his own shirt or pants. Now when I go to him, he already puts his head in.

Consultant: That’s his muscle control. If he has better flow of neurotransmitters now, his motor cortex can control his gross motor skills. Once he has the capacity, he has the showing: He can do it!
"Oh no! Not again! I know you want me to sit on the chair."
Mother: Something that I have heard him say. The other day the helper sent him to school. Immediately when he saw his teacher, he said “Oh no! Not again!”

The teacher usually sent a long description of what he did the whole day.

There was one time he was playing with the toy and it was toilet training time, so he came close to him. When the teacher came near him, he thought the teacher wanted him to sit on the chair. He said this to the teacher, “I know you want me to sit on the chair.”
​
Which I was very shocked until now. Did he really say that? Yes he actually said that.
"He would kind of 'sayang' (show affection)."
Mother: Last two months, I noticed that he would actually go up to the grandma and asked her to carry him. Then he would sit on her and start touching her face. He does it very frequently. He would also kind of ‘sayang’ (show affection).

He would be running around and suddenly he comes from behind and hug me and said,”kiss”!
​
Consultant: So he is expressing more emotionally now.

Mother: More emotions, yes.
​
Consultant: Which is what we hope to achieve for this Sleep Therapy. Eventually, this boy must be able to react to the people around him.
​"Whatever he’s saying, it is always making sense."
Consultant: How is this compared to the past?

Mother: He was not very expressive.
Although I know he knows a lot of vocab, because when he sees something he said that word, but he wasn’t expressive.

But very recently, I see he is very expressive.

He took two wooden doors of a broken car.
He said "Open and shut” (while gesturing).

Whatever he’s saying, it is always making sense.

"I am definitely happy to see his progress."
Consultant: In all aspects, he is heading in the right direction. As a conclusion, I always go back to the expectation that you showed concerns in the past. First 3 months, you mentioned that your expectations:

1. To be more mindful of the surrounding
2. To interact with people around
3. To have more emotions
4. To have social skills

Are you happy with the changes?

Mother: I am definitely happy to see his progress. Definitely there are progress. I am looking forward to continue this Sleeping Mat, to make sure that all the things that I mentioned is basically like 'tick the box'. Especially the social skills.

Consultant: Ok. Yes. It will only get better, if you continue to detoxify. And eventually, the reteaching will prepare him for the future better, even as a normal kid. And this is the most important thing: Treat him like a normal kid.