"He is more verbalising. The response to us is very good actually. Last time, I said it was on and off. Now, once you call him, immediately he will turn his head. He will run towards us. We can feel his presence. Last time, he was not there with us at all!

His father is also very happy with his improvement. Something suddenly opened up for him. It was a very quick change. It is like a miracle for us!"
​​
~ Mrs Siva

2yo Boy K (Singapore)
​
Medical history: Diagnosed with Autism at 2yo. 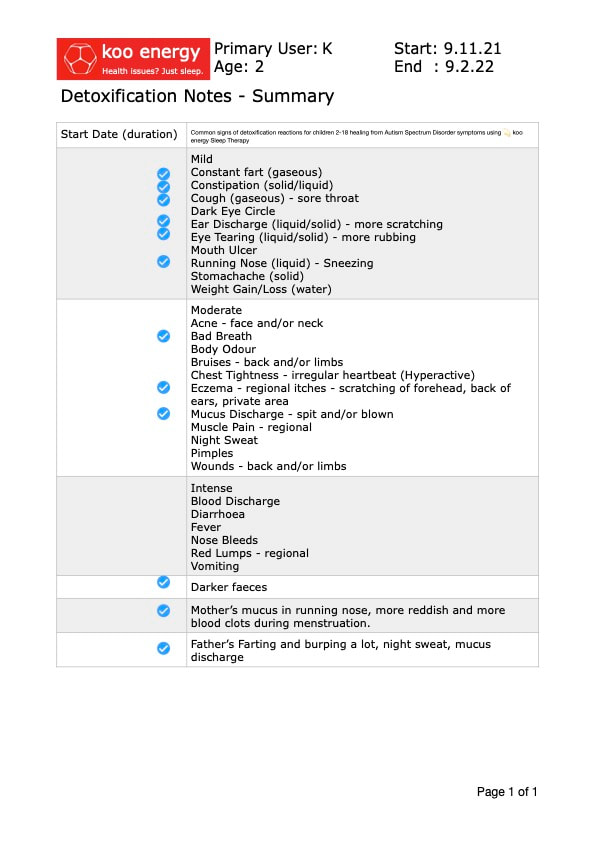 This is telling of his gut clearance.

"Rubbing of his eyes - more obvious than before."
Spinning reduced a lot, not obvious like last time.

It lasted quite a lot - within one and half to two months.

​Especially at night, when he goes into the room and he’s sitting on Healing Mat before falling asleep. He does it in the daytime, but not as obvious as the night.​
"Temperature was slightly higher but no fever."
When his faeces were darker, temperature was slightly higher but no fever.
​
Body was not so warm. Mood and temper was ok. He was being active.

Hands and legs were also normal.

9.9.21
After 3 months, the mother is happy to share her son's improvement in the respective aspects of concern - a big contrast from before.

"Once he falls asleep, he sleeps through the night, not waking up in the middle of the night."
SLEEP QUALITY

To sleep, he needs some time. He needs mother/father’s hugging. Once he falls asleep, he sleeps through the night, not waking up in the middle of the night.

Before Sleep Therapy, he used to wake up in the middle of the night and a bit cranky. But now it reduced a lot. He’s not waking up at all.

In the past, he used to sleep chest-down. I did not notice it any more in his night sleep too.

Faster at eating now.
​
Last time, he needed to use TV or tablet to eat. But lately, without tv or tablet, he can eat.
Last time, he took a longer time to eat. Now, it’s very fast.

For finger food, he used to eat with his hands. But last 2-3 weeks, he started using spoon. More muscle control - he can bring spoon to his mouth.
Chewing is good, compared to the past.
"​He is more receptive to trying new food."
Testing new food.
​He would come and see. When we offer him, he does not want. Like tempting him, but he does not want to try.

"Significant reduction in biting of things."

In the past, he used to bite everything he touched, including remote control.
Yes, significant reduction.

​He used to bit the wires and everything. But now, less a lot.

He likes to shower more. He will pull our hands to the toilet to bring him to shower.

Consultant: How about toothbrushing?

Mother: We need to hold his hand during toothbrushing. Less struggling.

Consultant: How about hair cut?

​He is happier now. More cheerful playing and running.
Unless he really wants something or wants to go out, he is not cranky. He is exploring more now.
​
Last time, when we brought him out, he would not sit on high chair. Now he does.

Escalators and all that - he’s exploring new things.
"He is showing his emotion now."​
Consultant: Do you see his personality coming out.

Mother: Yes. Now, he is throwing his anger, if he does not like something. If he wants to go out and I put back the shoes, he will get angry.

"His eye contact is very good. He is more attentive now. "
ATTENTIVENESS

Attentiveness wise, last time it was 2-3 minutes in Day 35.
Now almost 3-4 minutes.
​
His eye-contact is very good.
When we call his name, from far also, he will come to us.

"No more staring into space."
BEHAVIOUR
​In the past, he used to stare out of the window. Now, no more actually.

"​He is willing to engage with us more."
​
Consultant: Do you see him evolving in his character?

Mother: Yes. He is more attentive. Anything we ask him, we call him, he will come and approach.

Before Sleep Therapy, he’s not so engaging with the kids.

Now, he plays well with the brother. Even he pulls the brother to play with him.
Last time, he did that but not as much how he’s doing now actually.
"He shows more initiative now​."
Now, he has initiative.

Last time, he did not play much. He’s not into playing. He just sat down, just going around.
​
But now, he wants to play a ball, pulls his brother to play or his mother to go out. He shows more initiative now.

He shows his interest - he pulls our hands to what he wants - to the toilet to shower or kitchen if he wants something.
​Last two weeks, he started to point. But still learning.

"Now he can point."
He is less cranky and therefore more ready to take instruction. Now, he starts to point also.

Last time, he used to pull hands. Now he can point. Not very good, but he’s learning now.

"He is trying to imitate. Sequencing is very good."
VERBAL

He used to read through soft-touch books on animals, and alphabets.

Now, his new interest is the alphabets and humming songs like ‘wheels on the bus go round and round’. He does the gestures also. He hums the ABCD song. It is not clear. It’s soft to himself.

​In the past, he did not have any imitation at all.
He did not pay attention to the nursery rhymes or anything.

But now, he is paying attention to the nursery rhymes. He’s trying to imitate what they are singing actually, like the sounds of quack quack quack. He would do it too.

It is clearer. He knows the words are coming. Sequencing is very good.
Consultant: How did you feel when you heard/saw him doing this?

Mother: We felt very happy because he was imitating the sounds and the songs. We found it shocking. We just played the nursery rhymes and he picked it up from there. He’s able to follow and imitate.

Last time, he did not have imitation skills. He did not imitate at all.

Now he’s imitating - looking at something. We were quite shocked and very happy.

He can sing ‘round and round’ with his hand movement. He also takes the toy car, and plays with the wheels, and says “round, round, round” - he knows going round is "round round round”!
Actually more attentive now. Yes, more responsive.

He has two teachers from the same centre.

Now, she can feel the presence of him when she’s teaching.

"I can see a different child now - active, more, more responsive."
Consultant: Are you happy with sleep progress?

Mother: Definitely. The progress for sleep and  koo energy, everything. I can see a different child now - active, more engaging, more responsive. Social skills: last time he would not go to anyone. Yesterday, my auntie came to my house, and he went to her. He’s more engaged with everyone now.

Consultant: His world has opened up!
"We can feel his presence."
Consultant: After 3 months, have your expectation been met?
​
Mother: Yes. He is more verbalising. The response to us is very good actually. Last time, I said it was on and off. Now, once you call him, immediately he will turn his head. He will run towards us. We can feel his presence. Last time, he was not there with us at all!

Consultant: So you are happy with your purchase?
Mother: Very happy actually!

Consultant: As I have told you before - this journey does not stop after 3 months. There is room for a lot of improvement.
"Something suddenly opened up for him. It is like a miracle for us!"
Mother: The father is also very happy with his improvement.
Even the therapist also said - something suddenly opened up for him. We do not know what was that.
That day, out of sudden, he did “round and round” and all these things. It was a very quick change.
Even the therapist said, “I feel like I want to scream. I am so happy for him. It is a sudden change.”

Consultant: It is a gradual one though.
Mother: It is like a miracle for us!

Consultant: Great! I love to hear that word, especially when it comes to real application. It is no longer a dream. It is possible for this Sleep Therapy to create such miracle changes. What happened was really something that opened up - it was the midline canal that we so much wanted to deal with its toxicity issues.
​
You may wish to explain this to your spouse or teachers who had been handling your child. Let them know about this toxicity issues that bother millions of children worldwide. It is something so straight forward, but yet it has to be dealt with head-on - with the management of detoxification in the right manner.

"First 2 days of menstrual was more reddish and more clots."
Consultant: Mother is having a lot of discharge. You are rubbing your eyes a lot. Do you notice any detoxification in your blood clot?

Mother: After use of Sleep Therapy, first 2 days of menstrual was more reddish and more clots. 3rd and 4th day were ok.

Consultant: You used to have migraine on the right side of the head. Sinus once a fortnight. Muscle stiffness near the shoulder and shoulder aches.

Night sweat - not sure.
Reduction of his belly. His belly has gone down.

With good energy boost, his digestive system has improved.

"He did not have any flu, cough or fever like he used to. I was very surprised."
He sleeps in the 3rd room. (Additional User)

He used to have constant flu. Last 3 months, he did not have any flu, cough or fever. I was very surprised.
​
It’s been happening over the past 4 years. End of December, he would fall sick. And he would pass the germs to everyone in the house. Last Dec, I was expecting. But he did not fall sick.